Permanent markings ritually inked onto faces, biceps, backs, forearms and most surfaces of the human body, hold an enduring fascination unequalled by other forms of bodily adornment. In some cultures the act is less “ritual” and more “right of passage” sometimes with a drunk reveller as the “canvas”. Are the stories of customers passing out under the needle and waking up with a spider’s web tattooed across their face urban myth? We hope so. Traditionally the western “canvas” was a sailor on shore leave, but in recent decades the trend has moved from sea to shore. Increasingly hipsters from Shoreditch to San Francisco sport tattoos, and it’s they who may particularly appreciate the new limited edition Tattoo rugs designed by illustrator Rob Pybus for London company FLOOR_STORY. (continued) 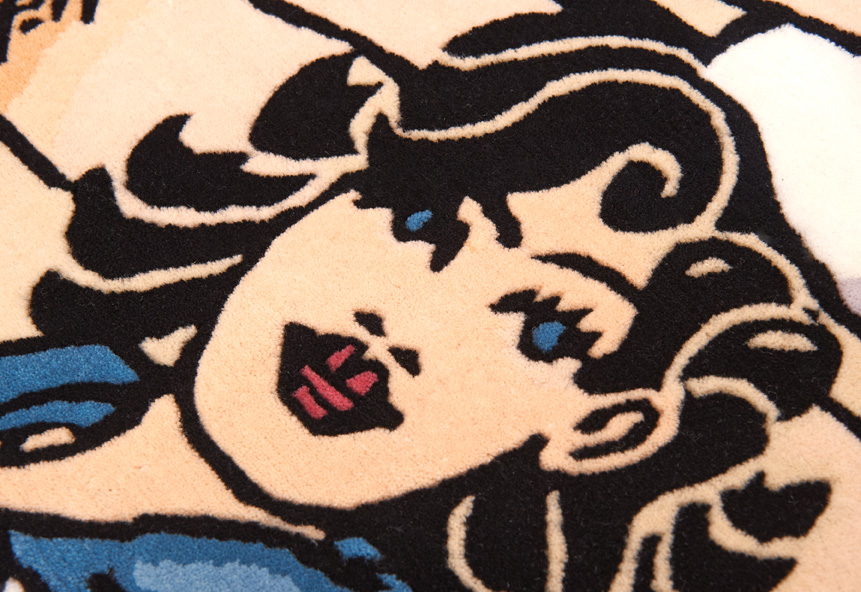 With all art – tattoos no exception – a spectrum of talent exists. A well-known social media meme shows a hard man sitting with his naked back facing a tattoo artist. He holds the model – an elaborate drawing of a winged stallion. But oh dear, the tattoo emerging on his back is a loopy doodle that looks more My Little Pony than Skor from Beast Quest. The meme’s caption “there will always be someone who says they can do it cheaper but at what cost?” sums up the need to do a bit of consumer research before getting inked, or for that matter, buying a rug. Fortunately the Tattoo rug series by Pybus represents the “winged stallion” end of the spectrum, i.e. Pybus has translated illustrations of vintage “sailor style” tattoos with clarity and precision which allows his designs to be fluidly translated into hand knotted high quality rugs. (continued) 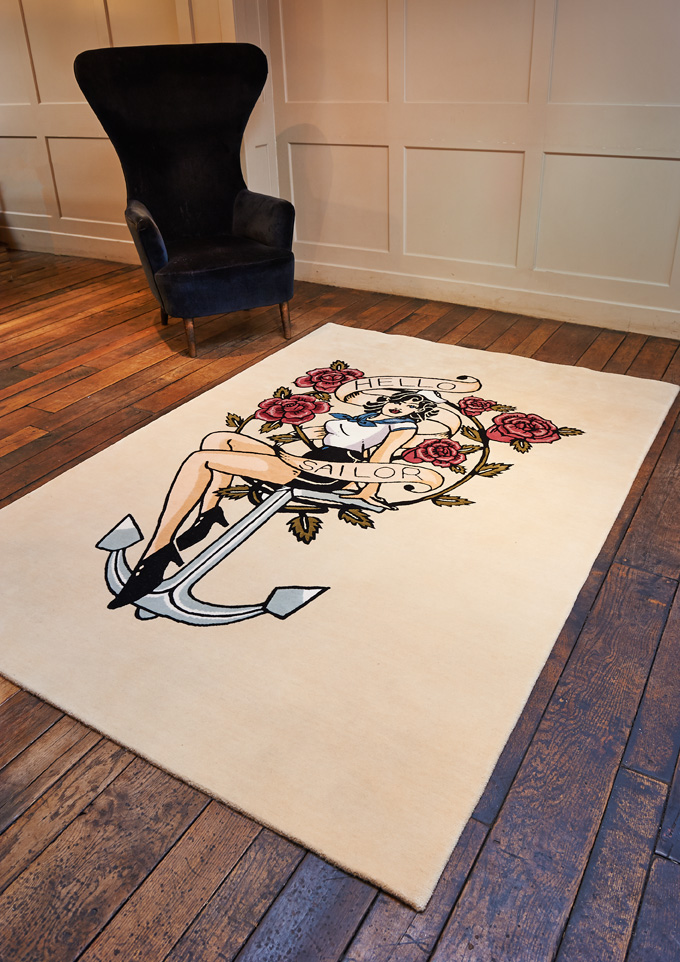 Rob Pybus and Kangan Arora (see COVER blog last week) are the inaugural artists in FLOOR_STORY’S eponymous new limited edition collection of rugs with a story – narratives captured not only in the surface design, but narratives that include the weavers and production methods, all of which are presented to new owners in a digital history file. (continued) 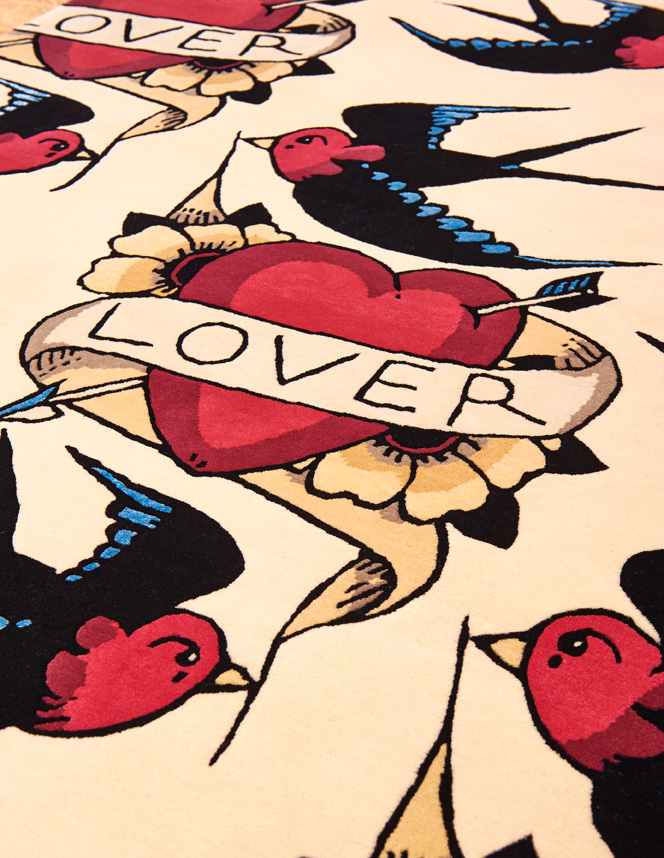 Commissioned by Simon Goff, Director of FLOOR_STORY (see image below), Pybus (whose clients include The New York Times – click here for his Wired magazine chefs gif), creates what he calls “whimsical worlds”. (continued) 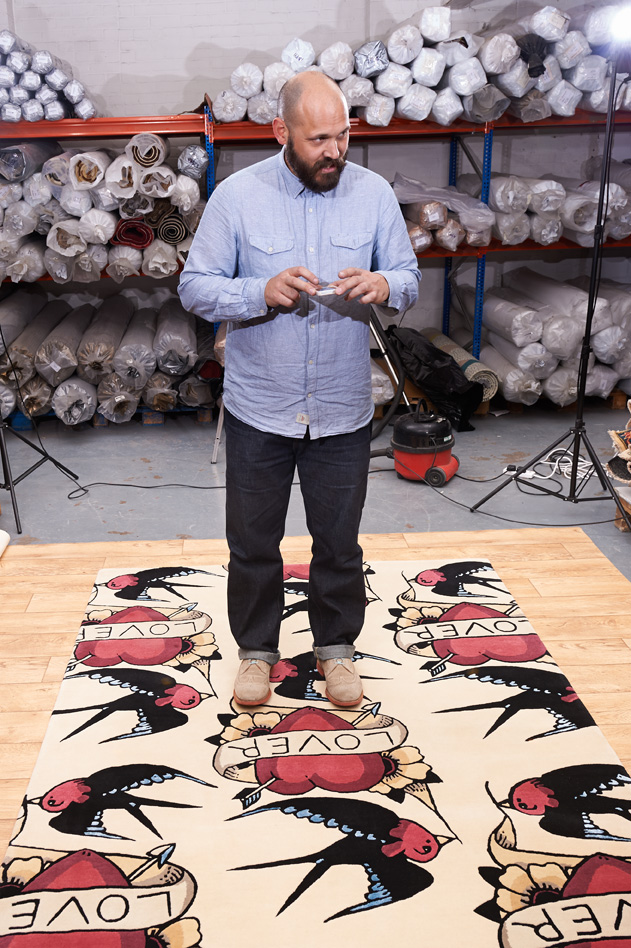 His FLOOR_STORY brief was “the perfect challenge” as vintage tattoo art has yet to be fully explored in “home-ware products” due to the challenges of scaling up and repeating traditionally small designs. Re-imagined as textile motifs, potential customers are assured that what they see is what they get. No need to glance nervously over one shoulder wondering if My Little Pony is being inked out of view.  END 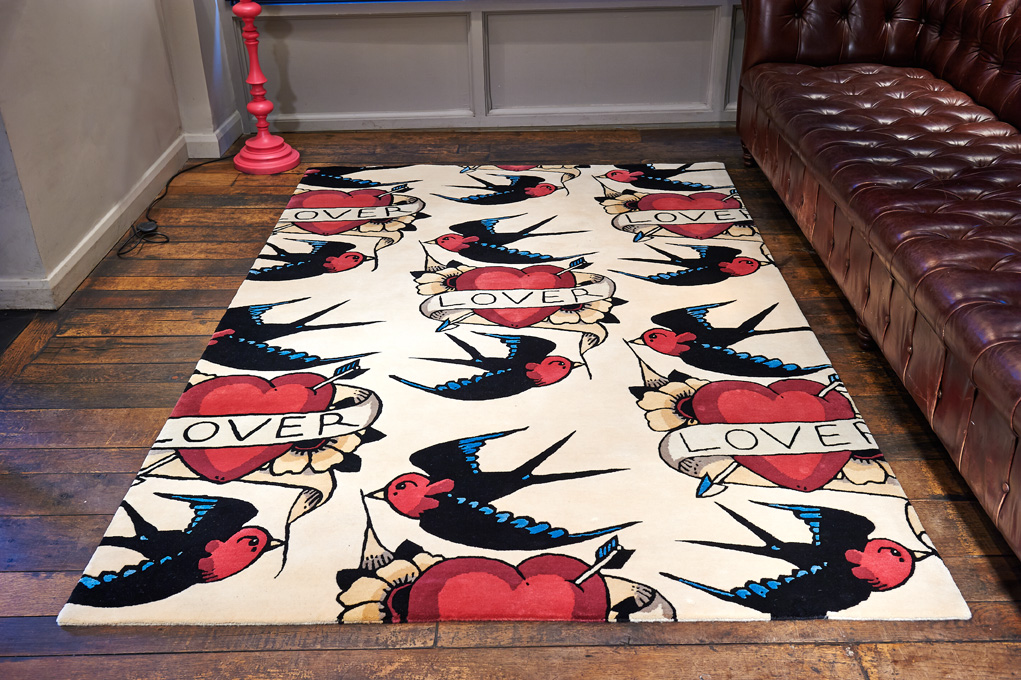