Bauhaus& | Modern Textiles in the Netherlands

2019 marks 100 years since the foundation of Bauhaus in Germany—a progressive school for art, architecture and design. One century on, the school’s modern and idealistic ideas and teaching methods continue to resonate around the world. The current exhibition ‘Bauhaus& | Modern Textiles in the Netherlands’ (closing 3 November 2019) at the TextielMuseum, Netherlands highlights the influence of the Bauhaus on Dutch textile design and traces its history from past to present. Lucy Upward talks to curator Caroline Boot about Bauhaus and the exhibition’s emphasis on the important role played by its women. 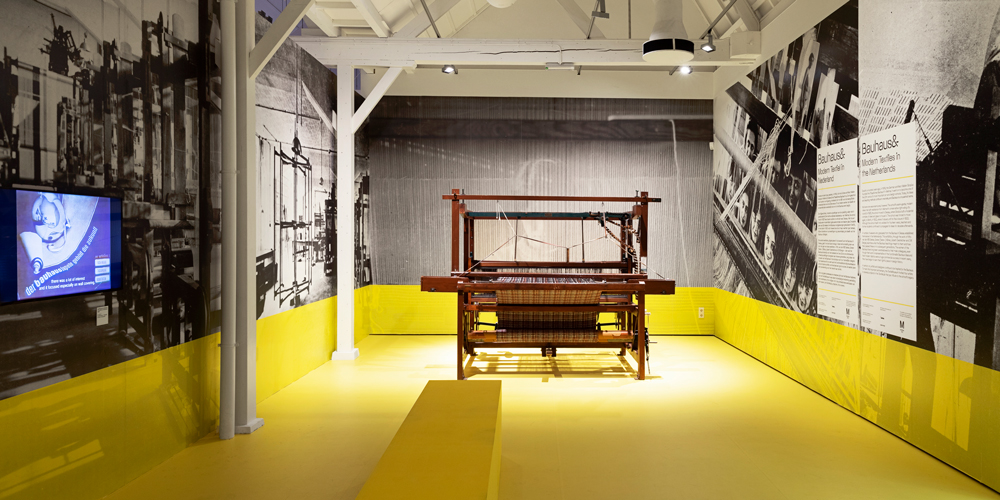 Why did you decide to emphasise the role of women in the Bauhaus?

The women of the Bauhaus have long been overshadowed by their male colleagues, even though their work is representative of the functionalist Bauhaus ideal and the modern fabrics of the weaving department, where most of the women had to go to, were a huge commercial success. In recent years, they have begun to earn their rightful place in design history. 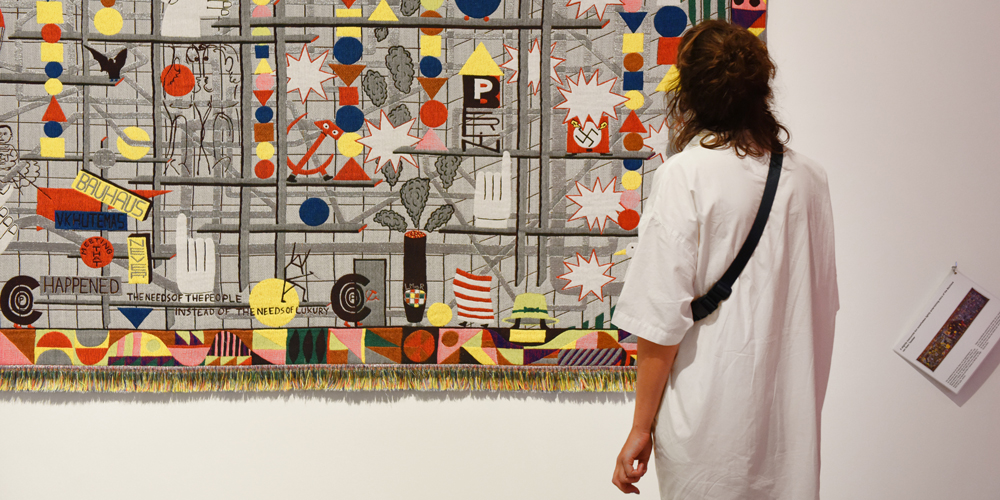 Despite the egalitarianism initially promoted at the Bauhaus, in practice women had limited access to other departments besides weaving. For example, the school recommended that the Dutch Kitty van der Mijll Dekker choose the weaving workshop after completing the Vorkurs. She actually wanted to be an interior designer; she had already been talked out of becoming an architect. Weaving was seen as an artisanal and not an intellectual activity. Women were believed to be drawn to it primarily because of their assumed innate female capacities and their focus on the practical. Crafts, including working with ‘soft’ materials, were seen as a female activity and had a lower status than painting and architecture. Anni Albers was also denied access to her department of choice, glass painting, and was directed to the weaving workshop. Ultimately, neither women regretted their choice. Albers later said that she had learned to listen to the threads and speak their language. 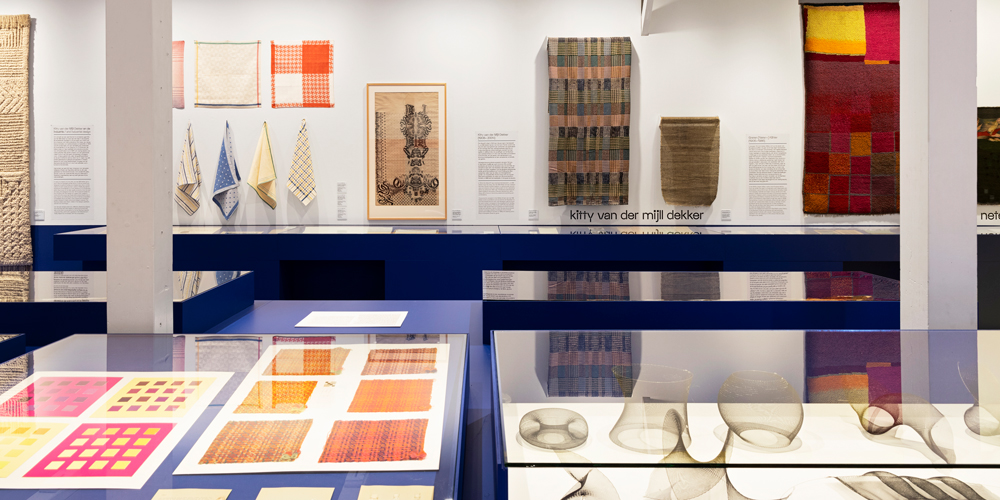 Can you choose a significant benefit to 21st-century society that’s resulted from the women weavers of the Bauhaus textile programme?

The attention to material, colour, structure and construction exercises in the preparatory year (the Vorkurs) of the Bauhaus has had a great influence and is still often the basis of many art and design courses, also in the Netherlands. As regards the Bauhaus textile programme: A number of weavers who graduated from the Bauhaus in Dessau established themselves in the Netherlands. The exhibition Bauhaus & | Modern Textiles in the Netherlands, through the work of Kitty van der Mijll Dekker, Greten [Neter-] Kähler, Lisbeth Oestreicher and Otti Berger, examines what the Bauhaus teachings meant to them and how they passed these on to subsequent generations. Especially the first two women were important for future generations of textile designers in the Netherlands because they both taught for decades. The Bauhaus teachings are clearly evident in their works: ornament derived from technique, with a focus on structure, weave and surprising yarn combinations. 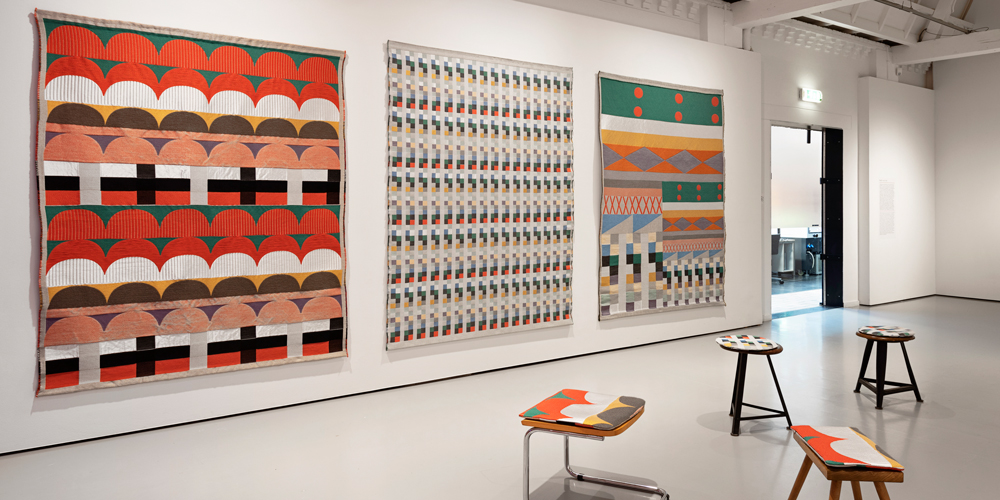 In 1934, Kitty van der Mijll Dekker started teaching at the Institute for Applied Arts Education (IvKNO) in Amsterdam, renamed the Gerrit Rietveld Academy in 1967. At the time, the focus was on artisanal products such as batiks. She transformed the department into a modern workplace, where weaving techniques, material and colour research were an important part of the curriculum. 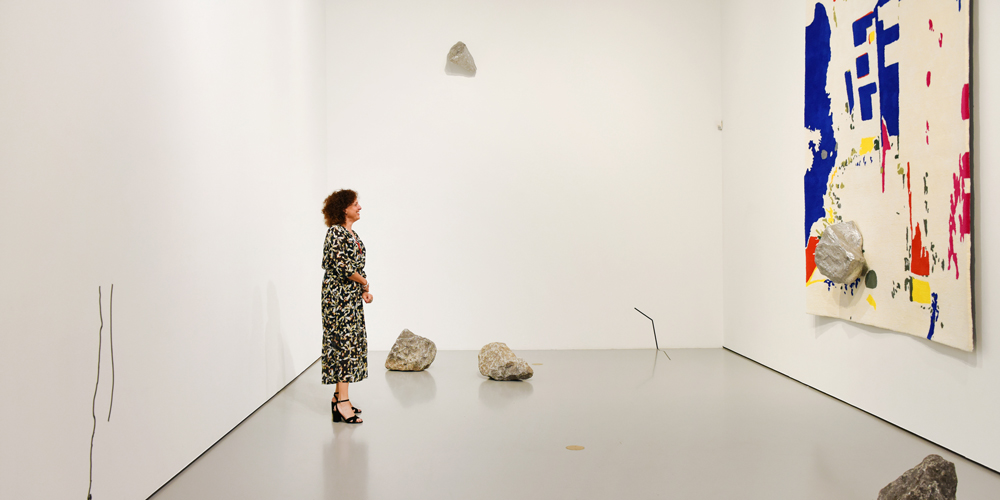 Greten Neter-Kähler also got a job at the IvKNO through the institute’s director, architect, designer and former Bauhaus teacher Mart Stam. She taught textile design, encouraging her students to explore the qualities of materials and the texture, structure and colours of fabrics. After both Bauhaus weavers retired, former students Herman Scholten, Margot Rolf taught weaving techniques. Maria Blaisse succeeded Greten Neter, introducing a large range of textile techniques to the curriculum. The influence of their teachers remained important. Technique remained the backbone of the curriculum, but textiles evolved and were reinvented to a large extent over the years.

The Bauhaus is renowned for prioritising abstraction over figuration, but the exhibition demonstrates both styles. What was the decision behind this?

During the existence of the Bauhaus, different directions were important in the field of textiles. In Weimar (1919-1925) the textile department initially focused not only on weaving but also on techniques such as knotting, crochet and macramé. A lot of craft products are made, such as curtains, book covers and dolls. However, weaving soon becomes the main activity of the department. Helene Börner is appointed as Meisterin des Handwerks and artist Georg Muche as Formmeister, the artistic leader. There is a lot of experimentation, because there is little professional knowledge about weaving techniques. Peruvian fabrics and cloths from the Andes are a source of inspiration. New patterns, shapes and colour combinations arise from the basic shapes triangle, circle and square with the basic colours yellow, red, blue or black and white (striped). Tapestries with a figurative representation that set the tone at that time make way for rugs with abstract patterns. In these designs from the early years of the Bauhaus, a strong influence is visible from the lessons of the painters Klee and Itten. After the move to Dessau in 1925, the shift from craft to industry and functionality is high on the agenda in the weaving studio. Series production and collaboration with industry are essential. A fabric is primarily seen as a flat surface and not as before as a painting with yarn. ‘Uses, not a painting of fabric, but function, design through structure’ is the motto now.

Gunta Stölzl took over as director of the weaving workshop from artist and architect Georg Muche. As a student in the early 1920s, she played a decisive role in the department. Although her own wall hangings were often unique and pictorial in nature, she set the department on the industrial course propagated by the Bauhaus at the time. Although the exhibition demonstrates both styles, the focus is on the second half of the twenties, the time that students as Kitty van der Mijll Dekker, Lisbeth Oestreicher, Greten (Neter)-Kähler and Otti Berger, later based in the Netherlands, attended lessons at Dessau. 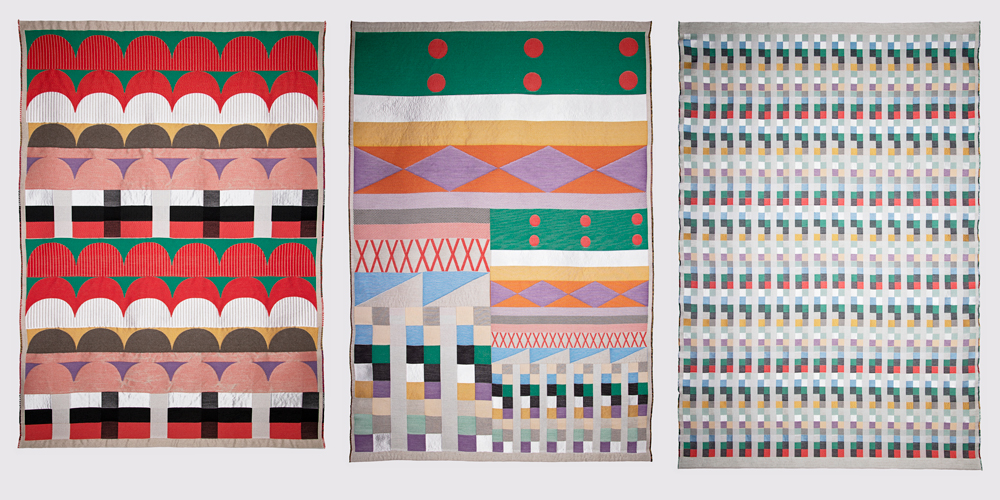 Cellophane and steel thread were two innovative fibres used by Bauhaus weavers. What new fibres (yarns) are you seeing now and what benefits do they bring to weaving?

Nowadays, you can think of biodegradable yarns like for example PLA (polylactic acid) which is important with regard to sustainability. They can replace polyester textiles. Also yarns made of seaweed or of other natural resources.  Another group of yarns are the conductive yarns of metal or carbon, which could be integrated in clothing for monitoring health. The combination of smart materials, wearable electronics, and sensors with fabrics opens the doors to many applications, especially in the clinical monitoring field. Textiles and clothes can be produced on fast and productive machinery at a reasonable cost, and the health and beauty industry is also taking advantage of these innovations. 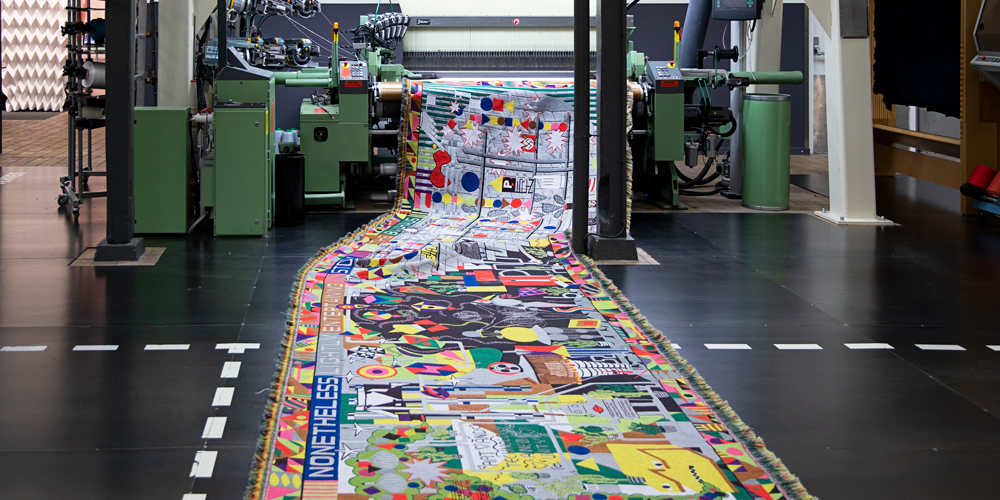 If the women of the Bauhaus weaving department were transported to 2019 as their younger selves—what message or advice would they give to young weavers today?

Sustainability would undoubtedly be an important aspect in their practice. Also the exploration of 3D weaving, an aspect which is examined by the Dutch designer Samira Boon. She created 3D structures on the advanced computerised looms of the TextielLab in Tilburg. A designer like the internationally renowned Hella Jongerius, is exhibiting aproject for Lafayette Anticipations at the moment, which is centred around textile and weaving which should appeal to nowadays ‘Bauhaus’ weavers.

In the world of fast fashion, textiles have become a throwaway product. This exhibition questions how we consider textiles within our lives, and the cultural, social and economic implications of textile production and consumption today. ‘Interlace’ by Hella Jongerius for the exhibition space Lafayette Anticipations revolves around the concept of textiles and weaving, developed through two specific areas: three-dimensional and digital weaving. By referring to the contemporary issue of textile waste, Jongerius aims to raise awareness about all the related cultural, social and economic implications, as well as to re-evaluate fabric. 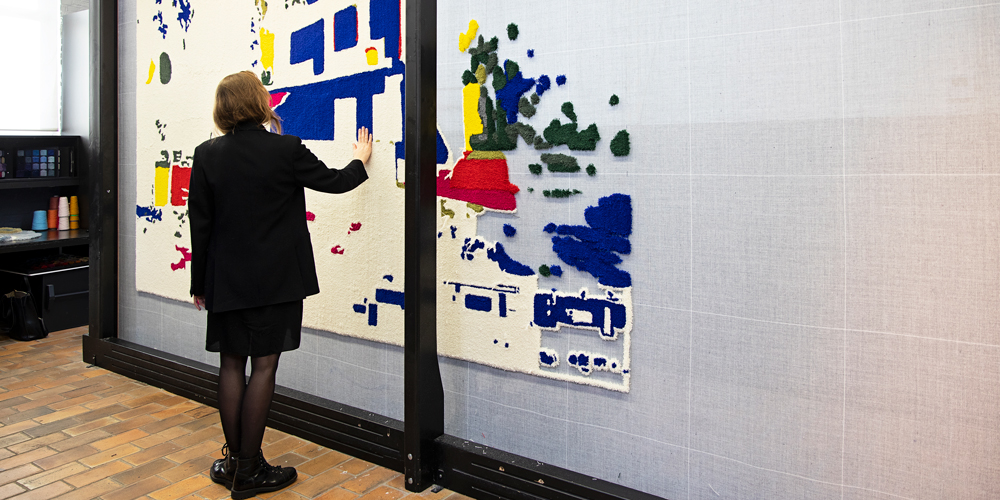 The exhibition is distributed into two ‘Looms’. Inside the Space Loom, weft threads get shaped into spheres, three-dimensional woven volumes and patterns, while in the Seamless Loom the 3D weaving method is used to produce woven textile bricks that can be combined into a soft wall. The exhibition examines weaving not only as a craft with a long history, but also as part of a larger technical, thematic and critical enquiry. ‘Interlace’ looks at weaving as a vehicle for cultural innovation, all the while questioning our relationship to textiles, tactility, labour and the natural environment.