In the latest issue of COVER we featured the amazing rug designs of Doble & Strong for Behruz Studio. Here we present the article online.

The images of artists Robert Doble and Simon Strong confront disease and death  as well as life. Yet, says Katie Loux, they translate into beautiful rugs

Disease, and its effect on human flesh, is not a subject commonly represented in rugs. In fact the collaboration of artists Robert Doble and Simon Strong with Australia’s Behruz Studio has resulted in a collection of rugs that is unusual for many reasons.

Doble and Strong’s rugs provoke you, and they have the visual depth of an avant-garde artwork. But they are appealing as rugs: richly layered with pattern and colours, and seductive in their lustrous texture. Artist-designed rugs can so often lose their soul in the translation from paper to wool. 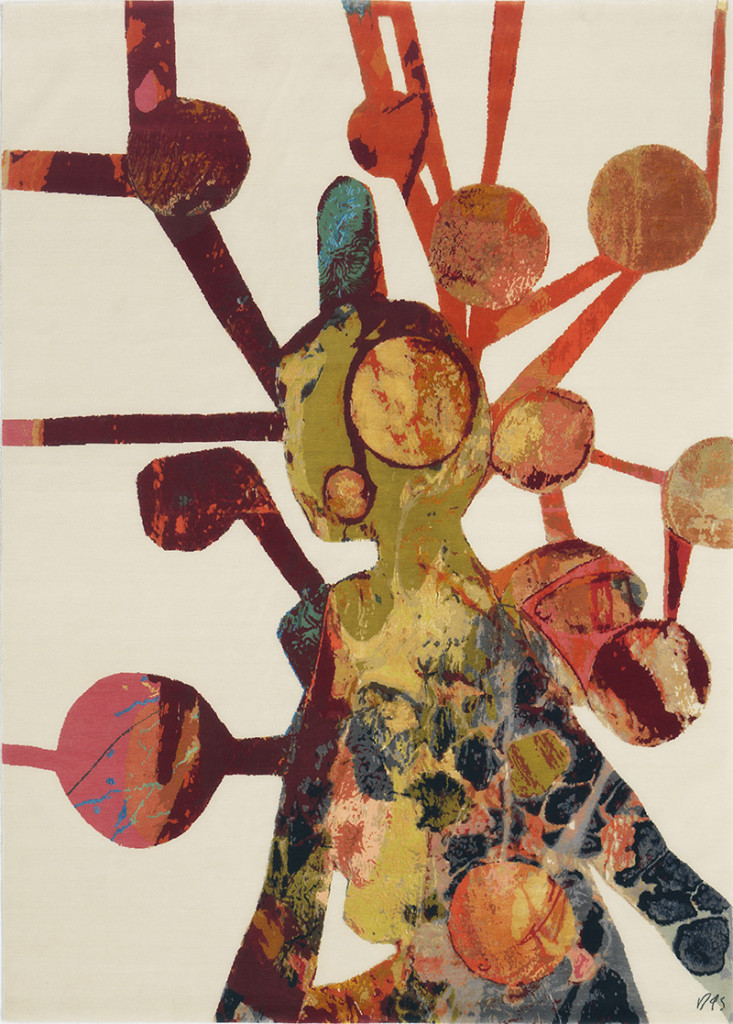 Robert Doble is a British-born painter, ‘drawn to the physical and emotional process of painting’. His paintings are gestural and layered. Vietnamese-born Simon Strong is a photographer with a background in graphic design, who makes layered images, visual composites to create new realities. He is ‘intrigued by dreams and constructs of memory’.

Both artists reside in Melbourne, and met through the art world in 2004. They became friends, as ‘we could discuss each other’s work from a critical point of view, giving each other honest opinions,’ says Doble. ‘That was why we realised we could work together.’

They decided to collaborate while on a trip to London to visit a friend of Doble’s who was dying of brain cancer. The visit had a powerful effect on the artists and resulted in serious conversations about collaboration, including technical discussions about the possibility of painting on photos, perhaps with gloss enamel.

The event triggered a shared investigation into disease, and scientific methods of altering and manipulating flesh. They scoured Doble’s vast collection of medical journals and reference books from the 1700–1800s. Both artists had a strong interest in human form and medical research – Doble had undergone cancer treatment, and had a personal interest in the behaviour and manipulation of cells. 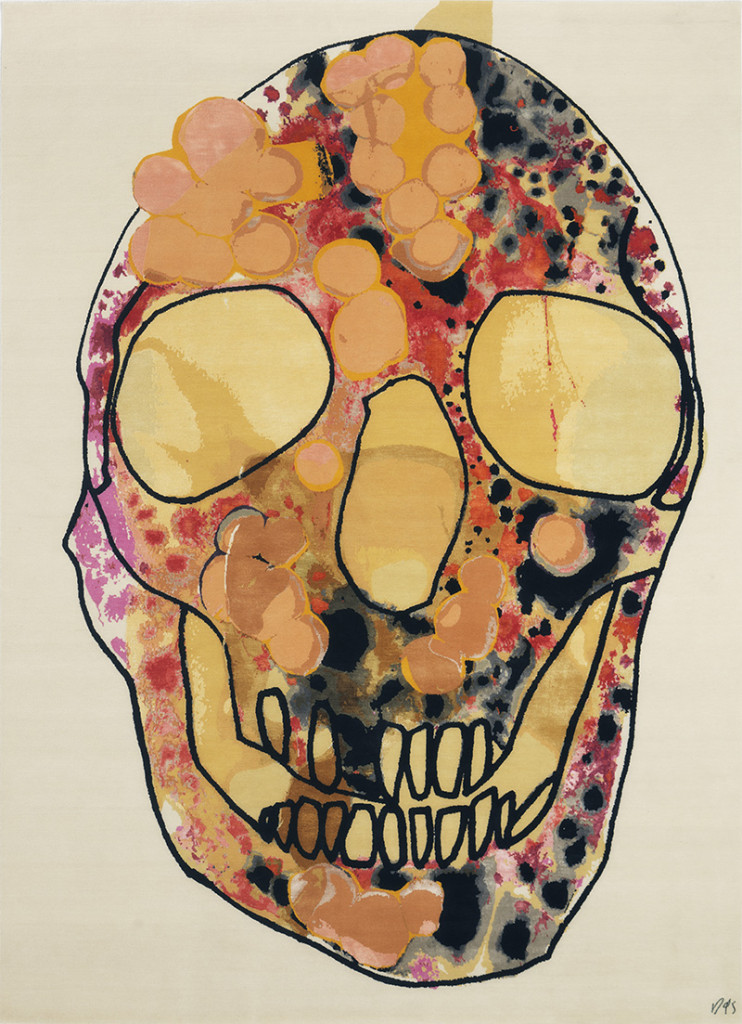 The act of jointly creating an artwork involved intricate planning and discussion before beginning the process, to ensure both artists held the same vision. Doble adds: ‘It was important to both of us that everything had to look like a solo work, and that two artists weren’t fighting each other.’

Stuart Rattle (a Melbourne-based interior designer) introduced Doble and Strong to his friend Behruz Aligorgi after seeing ‘First Born’. It was Rattle who imagined that Doble and Strong’s work could make a successful rug.

Aligorgi had worked on small-scale contemporary rug collections in projects with interior designers and architects, but the Doble and Strong collection presented a whole new level of complexity. ‘Based on my experience in rug production,’ says Aligorgi, ‘I felt that the work would be effective as rugs. I was drawn to the challenge of capturing the different layers of paint.’

The artists chose twelve photographic ‘composites’ to translate into rugs. Each rug used up to eighty-five colours. Aligorgi remembers: ‘It was a challenge to work out the number of colours to be used for each rug, versus the number of shades in each artwork, so that each rug didn’t look like a copy, or too stencilled. We had to understand the soul of the original artworks and then convey the feel and thought process to the dye master and weavers in Nepal.’

Aligorgi set up multiple looms so that the weavers could work on the collection in one go, rather than attempting one rug at a time. It made it essential for the weavers to fully comprehend the project and envisage the final piece. ‘The weavers did question the subjects,’ he says, ‘but soon understood that each rug was a beautiful piece of art. They enjoyed the process – especially as all the looms in the workshop were engaged with this one collection at the same time, so it was a feast for the eye.’ 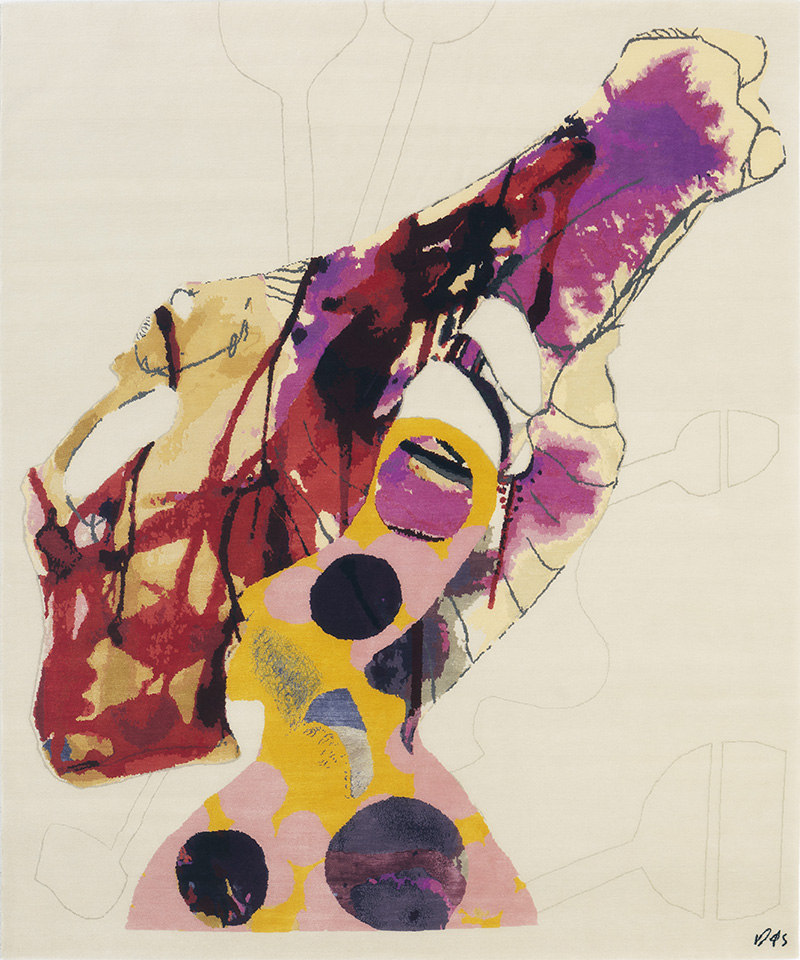 The resulting rugs are more psychedelic and playful, and less morbid, than the artists’ previous photographic works. The human form becomes a silhouette, and individual identities have dissolved, being replaced with the patterns of ectoplasmic forms, often to the point of abstraction. The confrontational, almost aggressive edge of the artworks has been ‘softened’ in the conversion into a rug.

Aligorgi’s decision to combine silk with wool was astute. The lustre of the silk conveys the same glossy quality of the enamel paint that Doble and Strong use to paint over photographs. ‘The silk helps to recreate different layers of paint,’ explains Aligorgi.

In the Skull rug, a jocular face grins at us, its features drawn with a hand-drawn line. Colourful, amorphous cell-like forms swim within the skull’s face, overflowing into the background. In a joint statement Doble and Strong explain, ‘The Skull rug is a memento mori, because a skull represents life and death, and in some cultures it is the seat of the soul. It was never meant to be morose, and we wanted it to have a fun, naughty energy. It’s not about death, but more a celebration of life.’

This is the success of the collection. It’s very difficult to be repulsed by the diseases and deformities of Doble and Strong’s figures. Their imperfections are just too attractive. 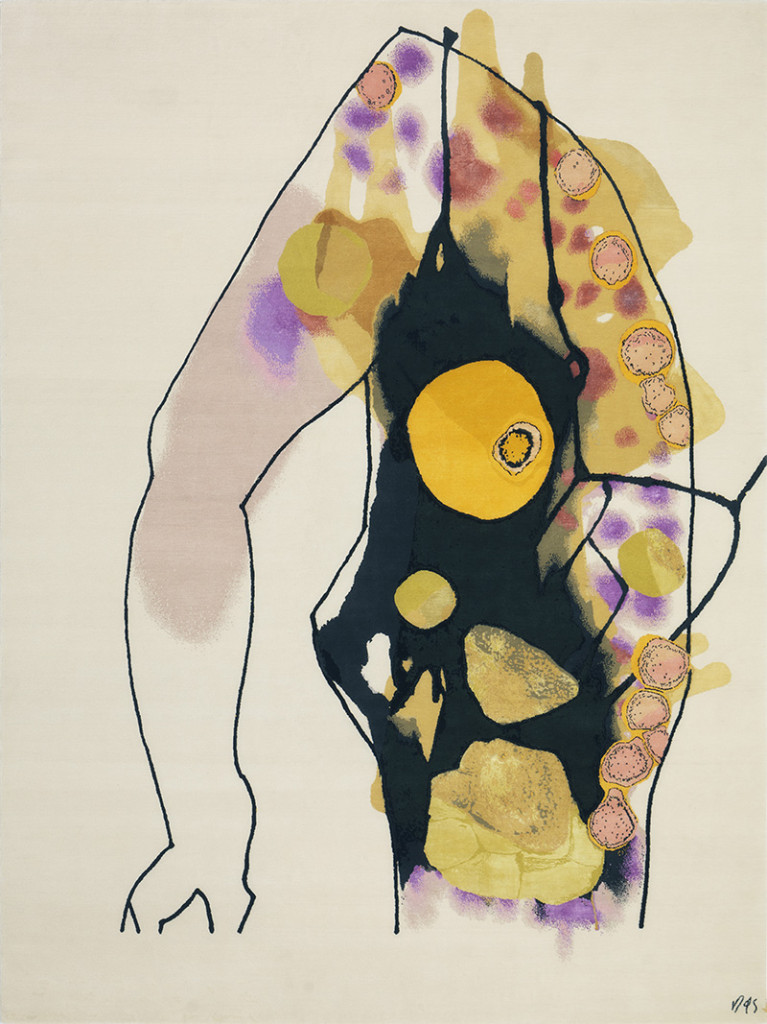