‘COVER presents Jan Kath’ returns to Milan in April 2015. For the show the rug designer once again takes us intergalactic. Lucy Upward joins him on his latest mission to the stars Space. The final frontier. Last year in COVER magazine we saw commander Jan Kath and his men (and women) orbiting six hundred kilometres above earth at a top speed of 27,000 km/h. The infinite vastness of the cosmos lay ahead. This year the intrepid explorer and his crew are continuing their quest to go where no rug designer has gone before. In 2015 the skilled crew managed to land the shuttle on the surface of the moon using their ruggedised seismometer package. A soft landing. Looking out from the cockpit across the desolate wasteland of the planet’s cratered surface, one crew member becomes aware of a strange presence at some distance. They drift closer and closer. Can it be? Can it really be a handmade rug? Someone shouts: ‘Launch the Lunar Rover!’ In the rest of the story, told by the German rug brand’s brilliant new 2015 marketing campaign of four adverts, the JK team finds not one but a collection of beautifully crafted, stellar-inspired rugs in the lunar landscape. This fantastical tale evolves in a similar way to Kath’s Spacecrafted collection. In 2015 it expands to twelve different designs, with seven more dramatic interpretations of images taken from the Hubble Space Telescope’s photographs. 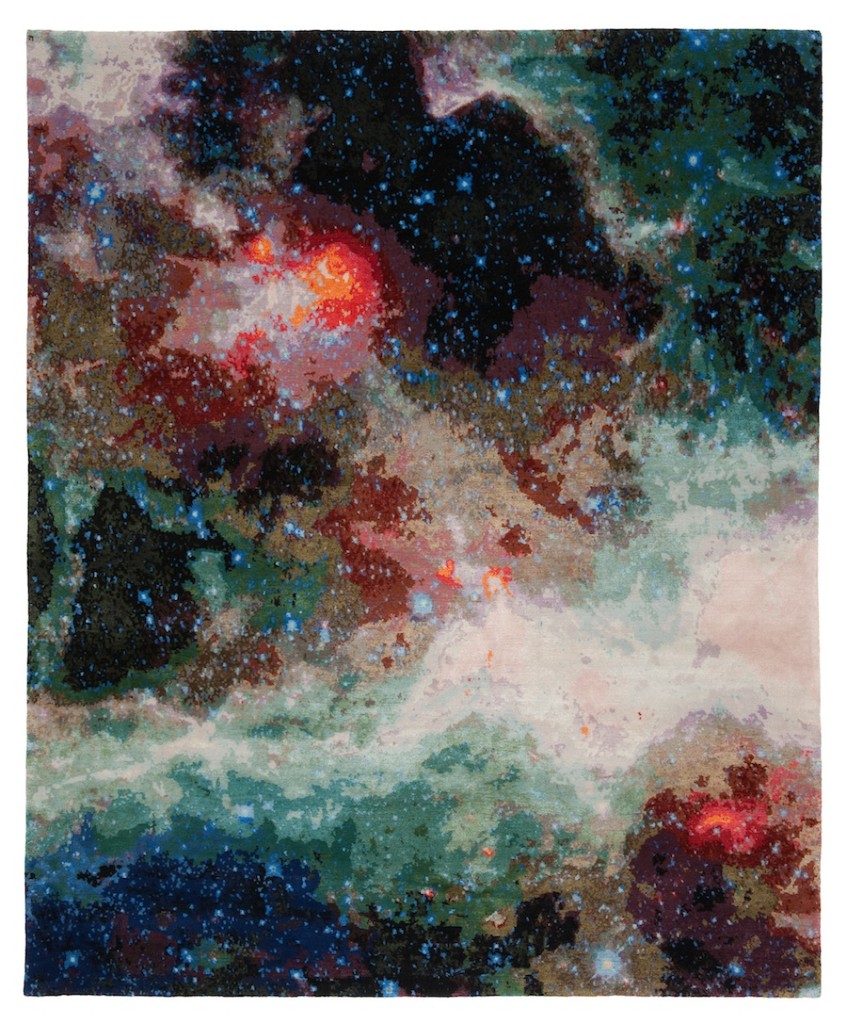 The compositions are incredible, Turneresque spacescapes of light and intense colour, offering an impressive amount of depth with the use of wool and silk combined. While Space 6 explodes in front of your eyes in a vast array of reds, oranges, pinks, yellows, Space 7 offers a quiet dark corner of the cosmos littered only by a few thousand million distant stars; and Space 4 looks like a cosmic storm in the making, with discordant colours both alluring and foreboding. To create these stunning compositions the knot count of each rug has to be very high, requiring the very top master weaver to work his magic. It is neither easy nor fast. On top of this, Jan Kath – one of the most innovative and in-demand contemporary rug designers working today – uses as many as sixty colours in both wool and silk, meaning there are an astonishing 120 tones available to create the grand imagery and the depth. While Moon 1 from the Spacecrafted collection lacks the theatrical drama present in the other rugs, it makes up for it in its clever photographic rendering of the moon’s pimpled surface. Up close one can see how the knots ingeniously create the pixels of the image – but stand only a small distance away and one is tempted to childishly emulate the footsteps of Neil Armstrong and Buzz Aldrin. 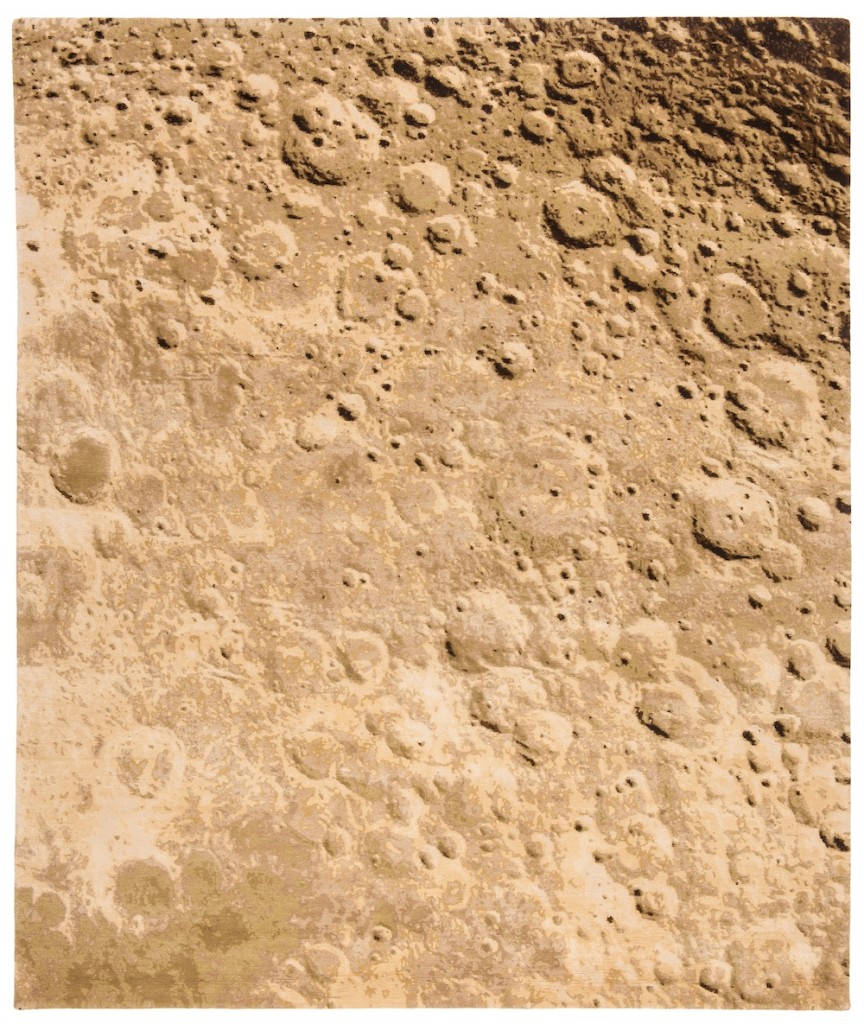 These rugs will be shown during Milan Design Week in April. This spring, COVER will present Jan Kath in the prestigious Superstudio exhibition space, where the Fuorisalone event is newly named SUPERDESIGN, to mark fifteen years of design at the venue and in the Tortona area. In 2014 we held our first ever ‘COVER presents’ show with Kath at Designjunction in Milan, to great acclaim. This year, the rug designer will return to the city with new additions to his two most important collections, Spacecrafted and Erased Heritage. The latter is a collection that celebrates the traditional oriental carpet by bringing the art form slap-bang into the 21st century, with a host of stunning visual devices and impressive weaving techniques. Erased Heritage is not only the quintessence of Kath’s skill and vision, but also currently the brand’s most important collection in terms of sales, which he says are ‘flying high’. ‘People are now queuing for these,’ he adds enthusiastically. The new offerings pay homage to the current 80s fashion revival. Adding neon colours to an oriental rug proved difficult, but after much experimentation Kath’s team once again pulled it off with great aplomb. ‘The hardest part was to get the bright colours to stay and keep fresh after the washing,’ he says. The designs look stunning and provide a great visual dialogue about time and space with the Spacecrafted rugs, which will sit alongside them in Milan. As Kath explains: ‘We like to showcase two diverse collections, as we as a company do not want to be nailed down to any one handwriting.’ And so as not to be tied down to any one idea, against the background of a million twinkling galaxies, Kath and his team float on and on into the blackness in search for more rugs. They have a mission. Until next time. ‘COVER presents Jan Kath’ at SUPERDESIGN at Superstudio, via Tortona, Milan, 14–19 April 2015 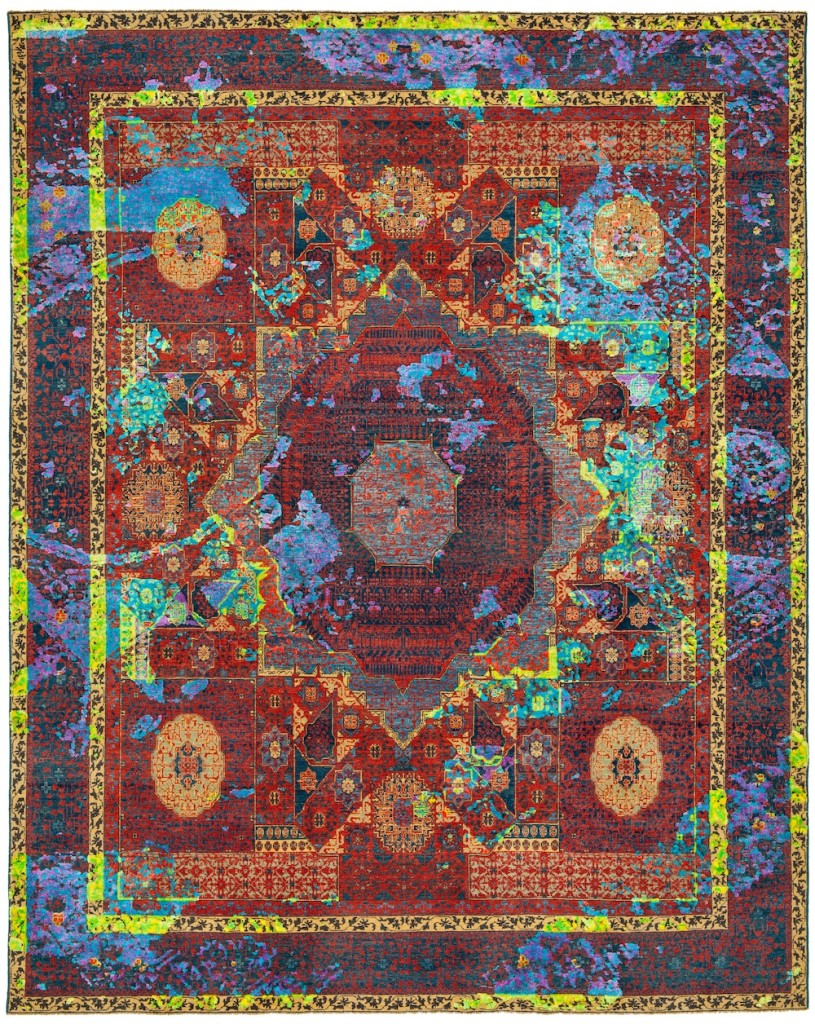