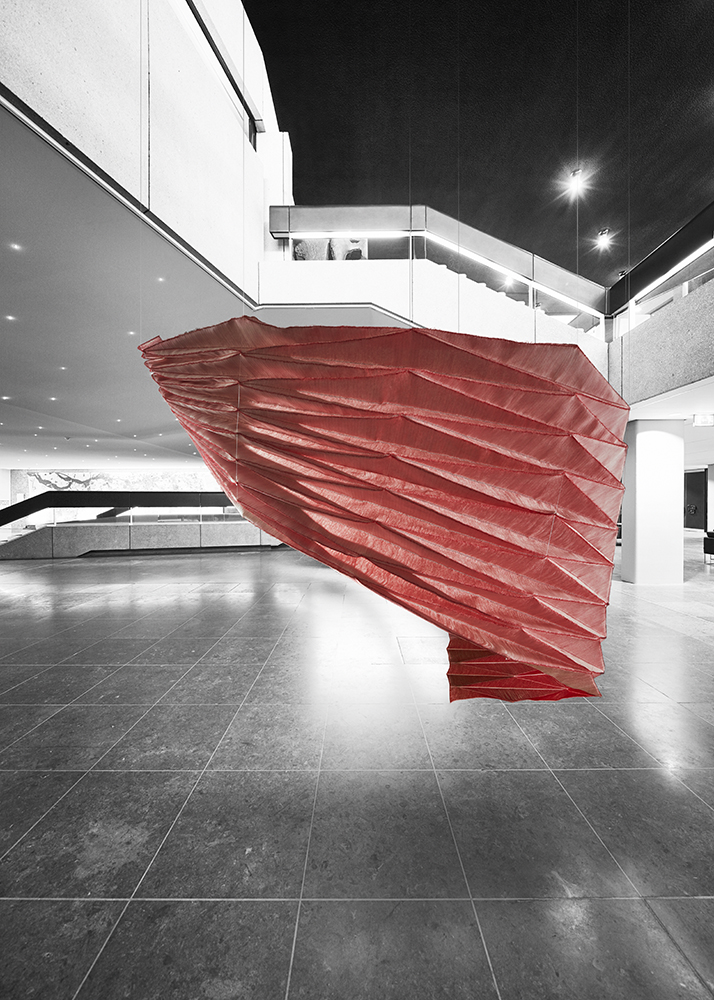 Textiles are increasingly forming part of the architecture around us. Denna Jones talks to designer Samira Boon, who runs a textile architecture studio based in Amsterdam and Tokyo that collaborates with architects to formulate site-specific solutions.

Shakkei is the Japanese term for ‘borrowed landscape’, a concept that means the quality of life can be amplified and expanded by a window that ‘borrows’ a beautiful view. It is a concept that in tandem with the art of origami suffuses the architectural textile sculptures of Dutch artist Samira Boon. Initially trained as an architect, Boon designs and ‘builds’ structural shapes through weave while constantly exploring and expanding the adaptive and anthropomorphic qualities of a structural weave. 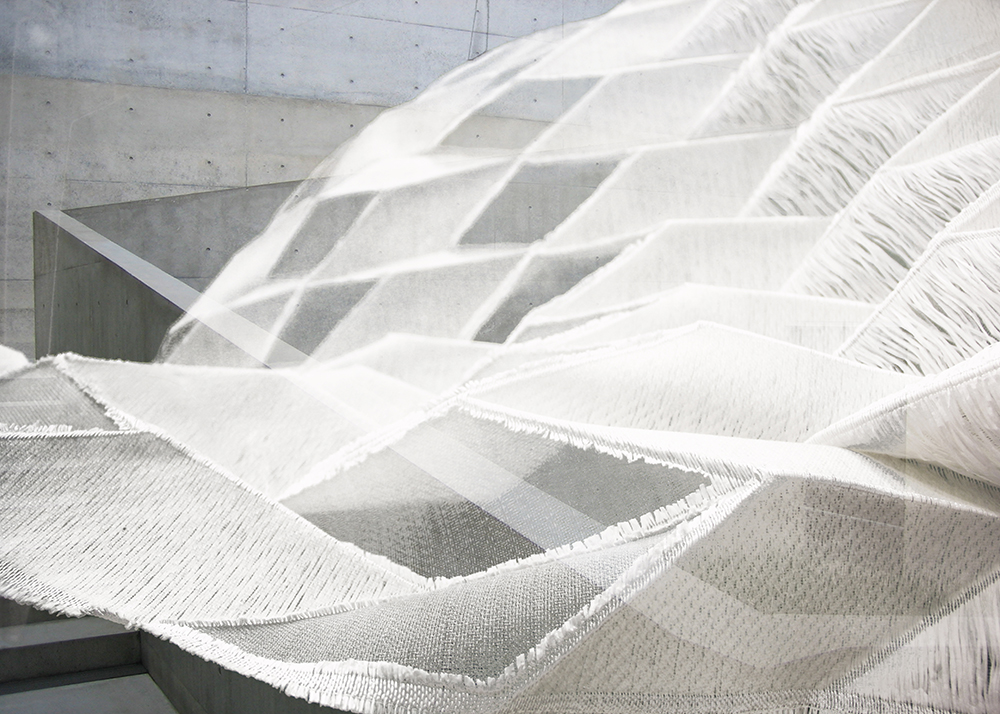 The structures include various properties such as light-sensitivity and transparency

Boon’s strapline—‘because textile is the future of architecture’—explains the trajectory of her thinking, but the emotional and intellectual influences of her work are connected to her homes; The Netherlands where she was born, and her second home, Japan. ‘Yes, it’s interesting you mention Tadao Ando,’ Boon says during our interview. ‘His abstract inside and outside architectural framing corresponds with the Dutch way of seeing inside and outside.’ Pressed to explain, she adds, ‘We never close our curtains! It’s very Dutch. We leave our curtains open to enlarge our rooms and enjoy the landscape.’

Japanese inspiration (Boon lived in Japan, has an office there and collaborates with the University of Tokyo) extends to Japanese design, particularly reconfigurable sliding shoji room panels. ‘Screens and the view enlarge your life,’ says Boon. ‘You can change your space. They show how architecture can be adaptable and alive.’ Shakkei and its Dutch equivalent plus the mobility of sliding screens are evident in two recent commissions: 10,800 Horizons for Schiphol Airport’s Holland Boulevard and Boon’s Archi Folds sculptural ‘wings’ for Theaters Tilburg. 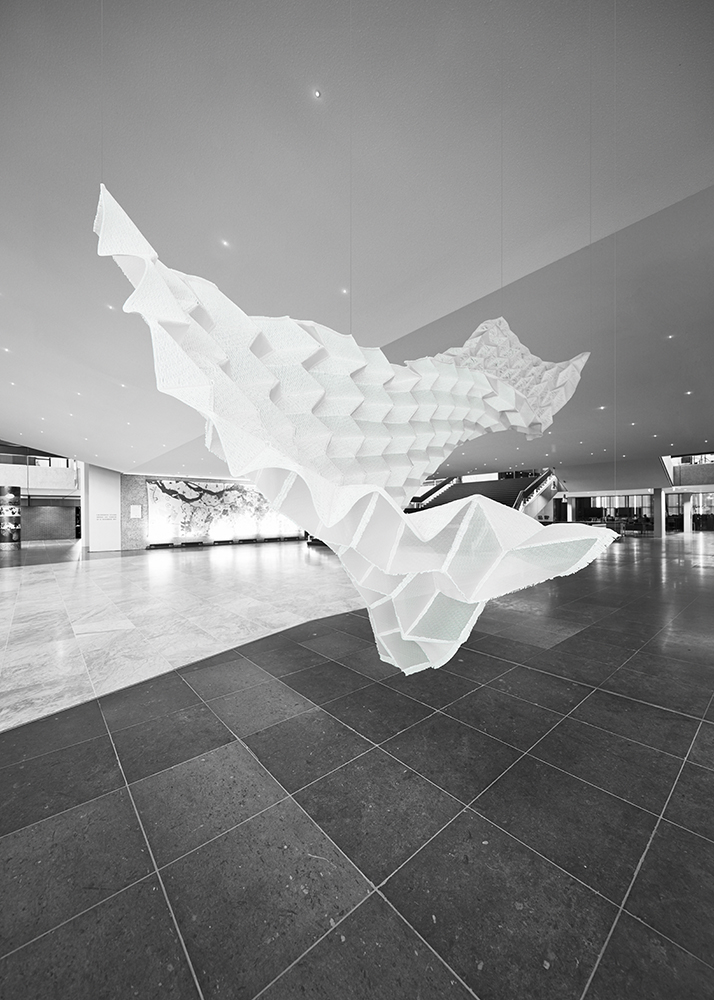 Boon’s woven landscape for Schiphol is named for the number of threads that amplify her abstracted adaptation of Matthieu Verhoeven’s photograph Empty Landscape—a line of trees disappearing into the mist of the Dutch landscape. Just four yarns were used to weave 24 panels measuring almost three metres high and 26 metres long. ‘We could have used more yarns,’ she explains, ‘but it’s meant to “dematerialise” as an image.’ Pauses between panels acknowledge Ando’s ‘implied intervals’. A single four-metre ‘tributary’ leads into a staff-only corridor, creating a layered landscape view for passengers sitting in the airport’s nearby ‘living rooms’, while travellers on the parallel horizontal travelator become mobile actors in a textile ‘borrowed landscape’.

A flock of Boon’s dynamic Archi Folds hang from a ceiling at Theaters Tilburg. The origami-inspired structures are machine woven with a special monofilament warp that encourages them to fold themselves on the loom. Larger Archi Folds need initial human help to fold, but they are in Boon’s words ‘trainable’ and eventually they learn to self-fold like a ‘human muscle’. Facing a glass-window wall, the Theaters Tilburg Archi Folds frame the exterior view and create a borrowed landscape for people in the street. Designed to be rearranged like shoji and ‘flattened’ as ‘curtains’, Boon admits users prefer them to hang as sculptures: ‘I showed staff how to flatten them, and I encouraged them to change their shape, but they see them as art pieces.’ Perhaps the real reason for the reluctance is the Dutch love of throwing open the curtains to the outside and inviting the world to share your view. 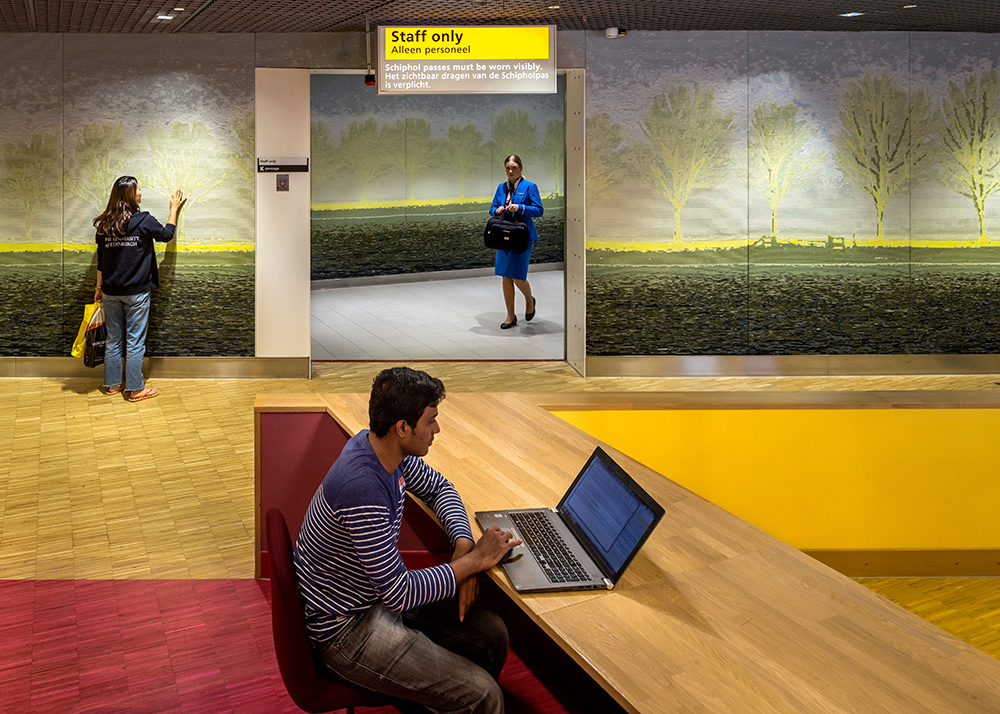 Boon’s textile artwork on the wall is part of the Holland Boulevard at Schiphol Airport, designed by NEXT Architects